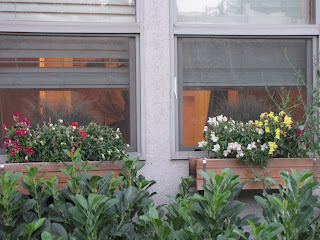 I wanted to post a pic of my cousin but the only one I have is when we were 10 and we were totally decked in my Grandma's clothes and jewelry posing as what else but Charlie's Angels. When we would play Charlie's Angels my cousin insisted that she get to be Kelly Garrett (aka Jaclyn Smith) because her name is Kelly. I agreed to it but secretly inside I was still Kelly because our first real names were the same. Anyhoo, I posted the next best thing and that is a pic of her flower boxes which I want to copy...someday.

If you haven't guessed this post is about my very cool, very hip cousin, Kelly Sansom. As kids we only got to see each other once or twice a year because we lived in California and then Oregon and she lived in Utah. But that didn't seem to matter because as soon as we got to Utah (okay I usually waited a day.... or a half hour because I didn't want to hurt my Grandma's feelings) I would call her and then spend the next two nights at her house. She had a cool room because it was all hers, she didn't have to share, and she had that cool poster of Rob Lowe hanging in her room. I know what you're thinking....she was an upstanding LDS girl, she faithfully put up a post-it to cover up his cigarette. I would live vicariously through her boyfriend stories, because she always had a boyfriend and an ex...I always had neither.

I write this post because technology has made it possible for me to get reacquainted with her in ways that distance normally negates. She has a blog which she shares with others not only her quirky thoughts and feelings but also her amazing gifts and talents. She has a lot of very fun ,very yummy, recipes. And through reading her blog I found that she makes pretty things and sells them...check it out!! If I had to choose a favorite...hmmm I would have to choose three. Triple threat because they say "I'm here and I'm ready to have fun" something I try to live by. Next would be Be a Blessing because it reminds me of what Sis. Kimball said "Never Suppress a Generous Thought" which after Saturday's R.S. Meeting is a new favorite motto. Last I would choose The Light Within because that is my whole point of this blog. I have gotten to know her in ways that I never would have normally because of our distance. She has tried a lot of things and has perfected many. I am sure she has had her fair share of crappy dinners, and lame looking crafts. She would probably be the first to admit it. But she has not given up on trying, and I have benefited by what gifts she has shared by finding the light within. I admired that from afar and thought "Hey, I'm related maybe I have some of that mojo in my corner. I do, but it is different. I have a light within because I am a Child of the same Heavenly Father. Not just because we each have a piece of Frank and Relda Bringhurst in us....although it doesn't hurt ;)

This post was long, sorry, I hope it has ignited a spark to look with in yourself and find that little something that could turn into a big something if you give it a chance. If not...so you won't think reading this was a big, fat waste of time, go to her blog, try her couscous and you'll thank me...and if you make it for other people, tell them I gave you the recipe!
Posted by Jacque at 8:58 PM

Oh, man this made me laugh. I totally forgot about that post-it over Rob Lowe's cigarette!
Thanks for the kind words, cous. And for the link love.