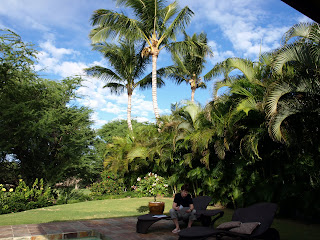 Here is Jeanne hard at work at the time-share condo Uncle Ron made available for us. This posh house has three huge bedrooms, with all the amenities, and we have found ourselves so busy seeing the sights that we haven't even tried the pool yet.
After off-loading all our luggage we hurried back to the airport to pick up Mark and Cindy. Then it was off to the dive-shop to experience what it is like to dive at night with manta rays. No pictures here in the blog, but we have an unbelievable video to share later. 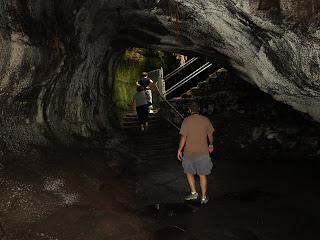 Day two included volcano observation. Here we are strolling through a lava tube -- luckily there was no lava flowing at the time. We hiked on, and around, and down into calderas and other volcanic structures the better part of the day. 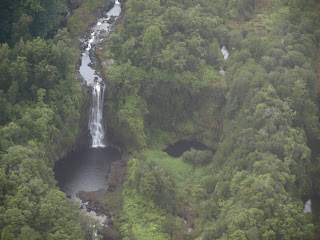 The following day we decided to observe the volcanoes from a more lofty point of view. We chartered a helicopter. This is one of many falls visable during the flight to the caldera of Mauna Kea. 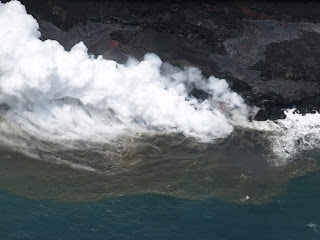 While flying over the caldera our pilot spotted a new run-off into the ocean. We flew over to check it out and saw this. Lava flow into the Pacific starts and stops unpredictably. We were lucky enough to have one start-up while we were in the air. It was pretty spectacular. 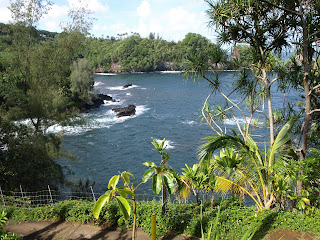 This picture was taken enroute to a botanical garden that was labled a "Must See" on our tour book. There is not enough room on this blog for all the pictures taken of orchids and other tropical flowers and vegitation. 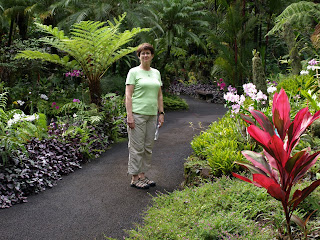 The quick walk through the botanical gardens took a couple of hours. It was kind of like the Garden of Eden -- only with clothing. 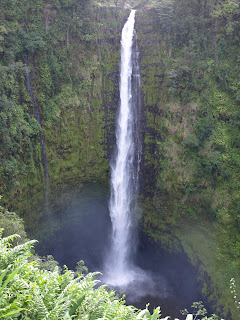 Just before sunset (which, by the way, occurs at about 6:30 when you are this far south) we visited Akaka Falls. This is the tallest falls in Hawaii, falling an impressive 450 feet. We felt like we were in Jurrasic Park. By the way, we were not far from where much of it was filmed.

Wow! What an incredible trip! Looks like you guys are having the time of your lives. The volcano stuff looks so cool it makes me want to go..