Alaska Favorites Part 3 you're gonna love this one 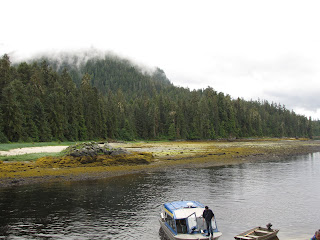 So my parents convinced me to leave my kids behind and head on an adventure.....a bear adventure. I remembered a song from girls camp "Goin' on a bear hunt...I'm not afraid".....that song lied! We headed to a place called AnAn. I asked our guide if the island was inhabited. He said "Well, it's the Mainland so yeah, Dallas is inhabited"....jerk..... The only thing we passed by were some canoes and we were told that it was a place where troubled kids go. They have to fend for themselves and kill/cook anything they want to eat. Boy did I feel comforted. 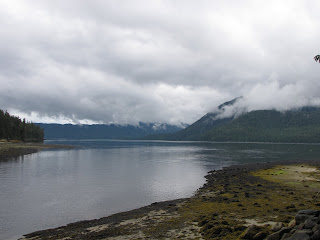 Looks pretty isolated...even for the Mainland. 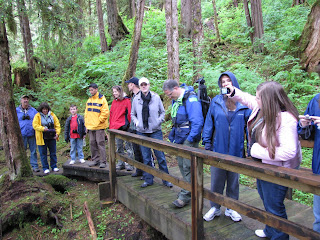 Here is our group. Unaware of what lies ahead. 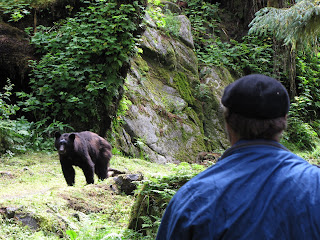 Hi Mr. Black Bear. Now I know why Aunt Patty and Aunt Cindy made me go right after the guide with bear spray and a shotgun. The bear kept walking toward us and then on up the hill. I think we bored him....either that or he was stalking us. 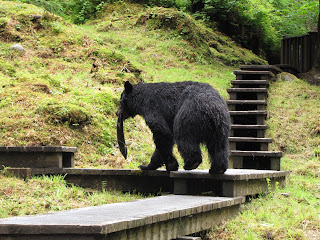 Oh, there is another one walking on our path..doesn't he know that this is a people path. Thank goodness he already has his lunch. 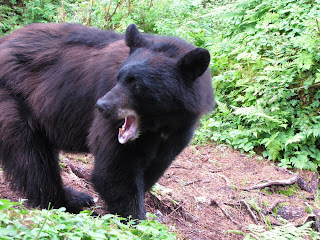 No my zoom isn't that good. We were really close to bears, all day long. Sometimes we had to walk out of our 3 foot fence (not joking) to go to the bathroom. That hole in the door isn't for ventilation...it's to watch to make sure a bear wasn't near. My cousin's son was in there and had to stay in for a while because a bear decided to mosey on by. Hopefully Josh went #1 and not #2. 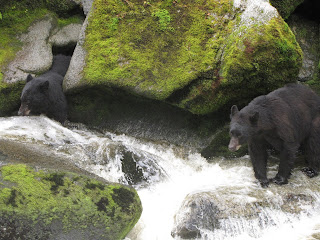 I wish I could put up more pics and videos but I think I am the only one who would be entertained. We did see one catch a fish and we quietly cheered after witnessing how long it can take them. I cannot overemphasize the beauty of our surroundings. Here we were in the middle of nowhere (but apparently on the Mainland) with a river chuck full of salmon, watching bears climb trees and catch fish, as bald eagles are swooping around screeching in the cool air. I was blessed that day to see God's beauty and be a small part of a big world.

They were not clear at all as to what this adventure was going to be like. I had no idea it would be so AMAZING!!! I am glad your folks talked you into going!

Thanks for posting all the pictures and stories! They're all so fun to see!

Loved the pics and narrative.