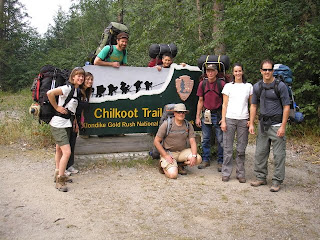 Well here we are, ready for the five-day ordeal. We will follow the same route the Klondike gold seekers followed in the late 1890's.

There was a great deal of smoke from fires in the interior the first day. Luckily the smoke occurred at a time when the views were obscured by trees. The air cleared up during the second day, and the weather was perfect all the way. 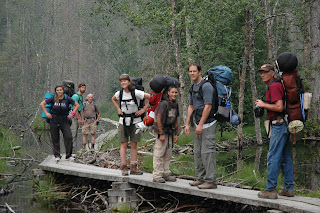 Starting out the first day the team still looks pretty fresh. Here we are passing through a burnout on a floating bridge. 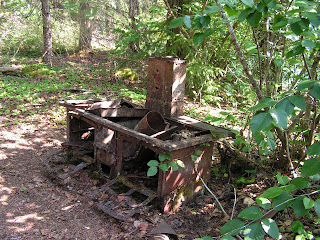 The second day included a stop at Canyon City. Artifacts were plentiful in this old stopover from the Klondike gold rush. How they were able to transport things like this cast iron stove is open to conjecture. 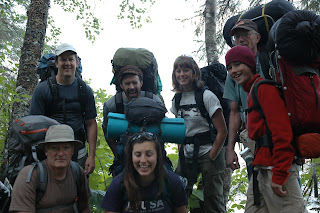 The team stops for a photo shoot starting out day-two. Backpacks were still very heavy at this time. Our first day was a very short hike because of the ferry arriving late. Consequently, this second day will be longer than planned. 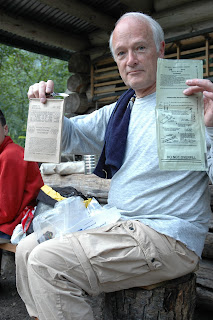 As promised, I brought no cooking implements along. However I snuck in a couple of MRE's just to see how the kids would react. Julie decided it was worth a photo as evidence that I enjoyed a warm meal on the trip. 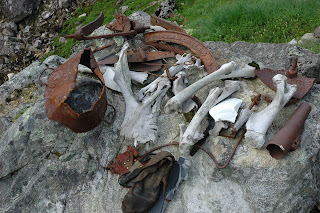 This is a place called "The Scales". Here gold seekers weighed their loads before the ascent up the Golden Staircase. Anything extra they left behind. Artifacts like these were plentiful in this area. 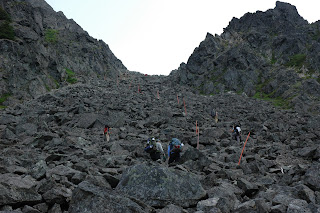 Looking up at "False Top" from the bottom of the "Golden Staircase". Looks daunting, and there are two more False Tops after this. 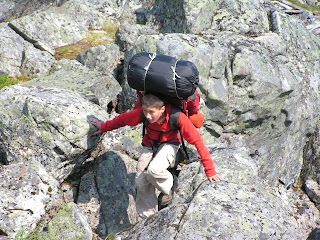 Spencer just getting under way for the top. He'll shed this long-sleeved shirt before too many more steps. 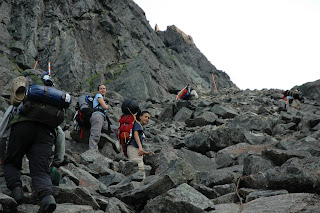 Mid-way up you see our team going hand over hand up the boulder strewn staircase.
Stampeders headed for the Klondike actually preferred the winter ascent because the steps cut into the snow were easier to climb on than these boulders. 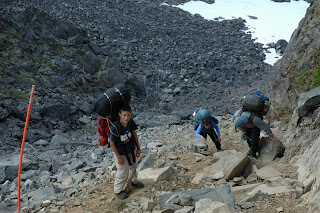 Spencer poses near the top on the Golden Staircase for a picture. He, in his BYU tee shirt, should be posted on the BYU website. 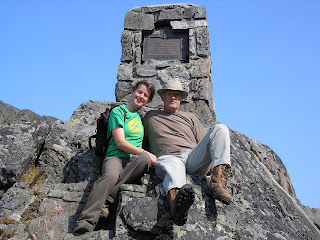 Jessica, having already rested at the top, comes back to rescue a distressed backpacker who wrenched her knee, and stops to pose for a photograph with the oldest member of our team.

This monument marks the summit and the dividing line between Alaska and Canada. Usually this area is blanketed in fog. For us it was beautiful sunny skies and a wonderful view. 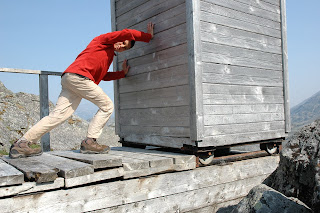 Spencer's ill-conceived notion to overturn the out-house was was photographed by his Aunt Julie. I imagine Papa Glen was in the out-house at the time. 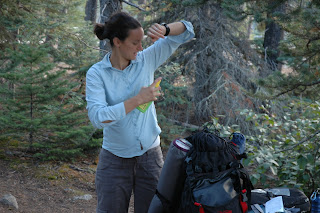 By this time in the hike, people would resort to anything to improve their body odor -- even the use of bug spray. Juliet demonstrates the technique here. 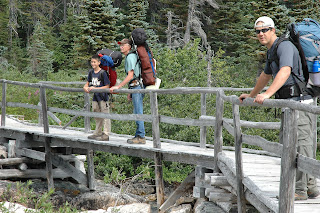 The bridge near Deep Lake. Everybody is still doing fine. By this time the two old men have developed blisters however and are hobbling just a little. 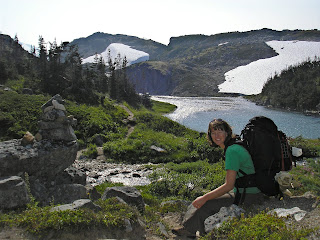 The Canadian side was treeless for much of the way -- being at about 3,000 feet, which is above the tree level at this latitude. The landscape was marked with glacial snow that provided fresh snow melt all along the way.
Jessica was quite conscious of her appearance along the way because some of the backpackers from other parties were pretty good looking. I'm glad someone was, because many of the rest of us smelled like horses "rode heavy and put away wet". 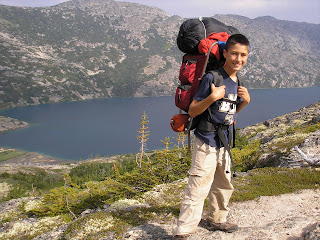 Long Lake behind this hardy backpacker was a beautiful site, as were the numerous other lakes on the Canadian side of the boarder.
Spencer's backpack was a big as he is but that didn't slow him down. He was the first one to arrive at Bennett Lake, and when he passed me he was running. 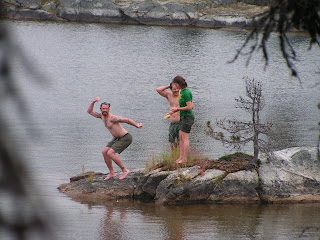 The last night was spent at Bare Loon Lake. Some of the brave ones decided they were tired of smelling bad -- time for washing up. The swim out to this little island required passage through leach-infested waters. None of them seemed daunted by the the danger.
True to its name, there were loons in this Lake. Their beautiful sounds made this a much more enjoyable stopover. 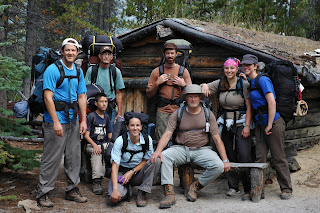 The group pauses to pose before this old cabin that reminded us of what the good old days were like. The end of the trail is barely a mile from here.
This was the final day of the hike, and most of us show it. 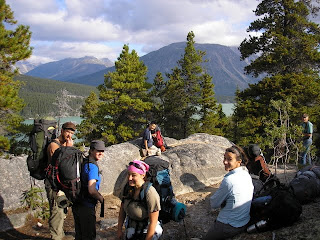 Nearing the end now. The lake in the background is Lindeman.
Many of the stampeders built boats here only to see them dashed to pieces on the rapids between here and Bennett Lake. The wiser ones pushed on to Bennett before building their boats.
With only two more miles to go, we pushed on as well -- somewhat reluctant to see this wonderful adventure drawing to a close. 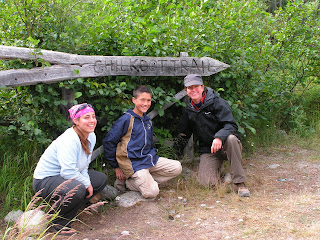 The end of the trail. The trail marker now points the way back to Skagway. They don't look too worse for the wear do they?
33 miles of unbelievable terrain as far as scenic beauty. We finished with a much greater appreciation for what the stampeders went through in the search for gold that put Alaska on the map.
Posted by Papa John at 9:05 AM

Great photo journal. It looks like we missed out on a great adventure. Thanks for sharing.

I loved this post. I feel like I went on the hike minus the stink, the blisters, and the yummy rabbit food. Where is Heartbreak Ridge?

I really liked all the pictures! It looks like you guys had a great time. I agree with Jacque it was like you were there but didn't have to smell the worked horse that was put away wet (or something like that). Congrats. That looked like an awesome adventure.

That's awesome you guys! We've been fixin' to get our kids beyond hiking into backpacking. We'll have to head on up there - lol!

Wow, what a great adventure. I have done alot of backpacking in my time, and the photos did not make me miss it one bit. Way to go John!

So jealous. So very jealous. The scenery was spectacular, and would have been well worth the blisters and stinky pits. I could almost feel the dust of the trail and the smell of the trees (or smoke, depending on the day). Thanks for sharing those.
Chris

All the pictures of fun almost makes me wish I were there! I then I think about the camping part, stink part, blister part, MRE part...and I'm glad it was all of you with such a grand adventure! Thanks for sharing!