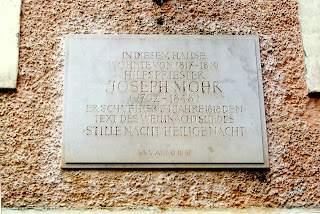 One of my favorite Christmas albums as a child (okay who am I foolin' it still is a fav) was Muppet's Christmas. I loved when John Denver got quiet and told the story of Franz Gruber and Joseph Mohr and how Silent Night came to be. The rough translation of this plaque is "In this house lived from 1817-1819 auxiliary priests Joseph Mohr (1792-1848). Here created in the year 1818 the text of the Christmas Carol Quiet Night Holy Night. When Shane surprised me for Christmas with the Chorale trip to Europe he began to tell me all the places we would get to go. Oberndorn Austria was the one I was most excited about. 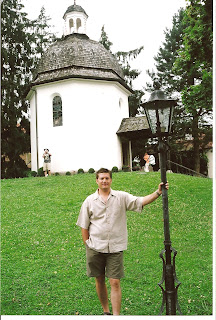 I remember a talk given by Pres. Faust several years ago in which he said "In the war in which my father served on the western front, in the stillness of Christmas Eve there wafted over the trenches to the ears of the American soldiers the soft sound of the voices of their enemy singing, “Stille Nacht, heilige Nacht” (“Silent night! Holy night”; Hymns, no. 204). Their enemy in turn could hear the American soldiers singing, “Peace on earth, goodwill to men” (“Far, Far Away on Judea’s Plains,” Hymns, no. 212).

Twenty years later, in the war in which I served, the same area and the same enemies were involved. Although I did not serve on the western European front, on Christmas Eve the English and American soldiers could hear the Germans sing, “Stille Nacht, heilige Nacht,” and the Germans could hear the Americans sing, “Peace on earth, goodwill to men.” This song was able to bring peace if only for a day. Each Christmas since Europe when I hear this beloved carol a well of emotion washes over me as I think of this powerful song written in a tiny church by two humble men on a quiet Christmas Eve.

Yeah if that song is sung just right I get a little teary eyed as well. That and "The First Noel" one of your favorites as well. When are you coming after the holidays? I need to be ready to get you and maybe a few of your girls spiffed up with sparkles :)